We the people have to #SaveTheConstitution 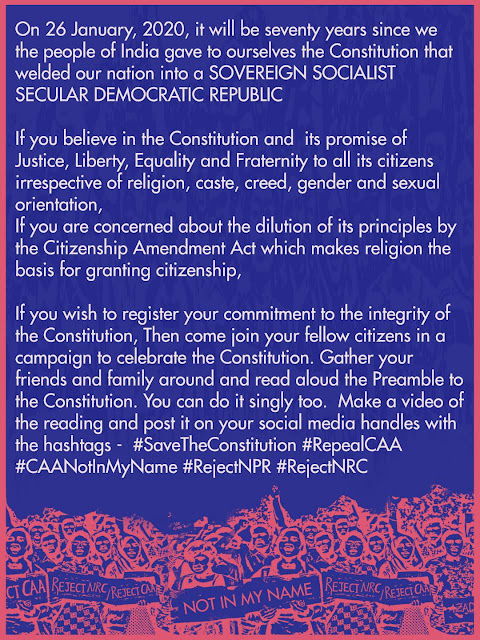 
“When you hold this small leather-bound book in your hands, you are holding the very destiny of this nation written 62 years ago”  -- K K Venugopal, Senior Advocate of the Supreme Court of India.
The 89 year old Attorney General of India wrote that in 2016 andit was his foreword to the ninth edition of the beautiful little copy of the Constitution of India, published by the Eastern Book Company, Lucknow.

He ended it saying“…this little book in our hands has revolutionized the lives of the people. We have a long march ahead and day –after-day the sacred words of the Directive Principles of the Constitution have brought solace to the billions of people of this country; and that is why I believe that this elegant book should be in the pockets of every Indian, enablinghim to derive inspiration from the greatness of the ideas contained in the Constitution of India, which we, the people of India, have given unto ourselves”.

Azadi..from RSS, from the idea of Hindu Rashtra, say protestors 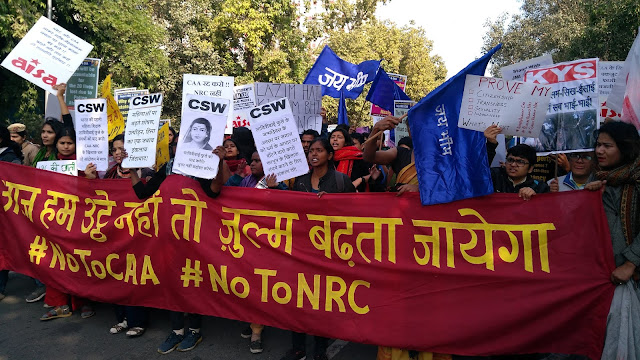 
“Inquilab Zindabad”
“Hum kya chahtein hai Azadi”
The last time one heard those slogans was in the Kashmir Valley many years ago. And before that in black and white celluloid films that had documented India’s freedom struggle.
They rent the air of the national capital today. No. Those who raised them were not seeking to secede from India, but wanting freedom from many things including the RSS, “gai-gobar” “Hindu Muslim”(divide) “manuvad”, “jativad” “Parivar” (Sangh Parivar), “Go Mootra” (Cow urine). All the slogans lustily raised by the youth was their fight against what some of them see a threat ofIndia turninga “Hindu rashtra” , in the not so distant future.
Prime Minister Narendra Modi and Home Minister Amit Shah have an adversary they simply cannot take on. Savitribai Phule who appears to have risen from ashes to do what she did way back.She worked to educate women, and fought to abolish discrimination and unfair treatment of people based on caste and gender. On…
Post a Comment
Read more 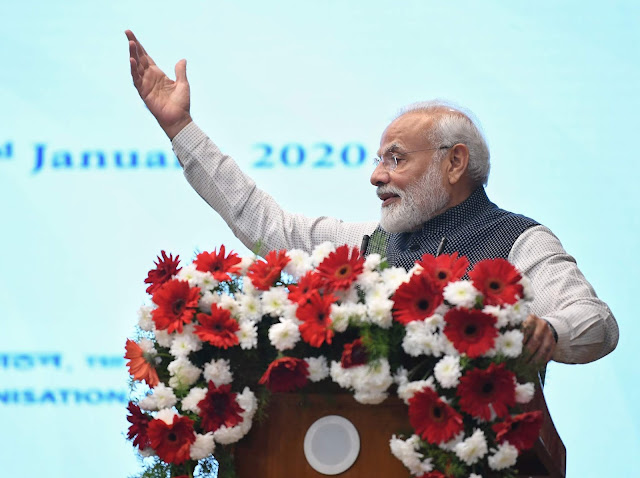 Prime Minister Narendra Modi has a new agenda for Indians. He wants usto hit the streets of New Delhi, Bengaluru , Kolkota and other Indian cities, and protest against what the Pakistan government is doing with its minorities!
Equally, he wants the Congress leadership to train their tongues, not againstthe Citizenship Amendment Act, but against the Pakistan government.
“Pakistan was formed on the basis of religion, religious minorities are being persecuted there. The persecuted were forced to come to India as refugees. But Congress and its allies don’t speak against Pakistan, instead they are taking out rallies against these refugees,” Modi said in Karnataka’s Tumkur on Thursday.
Modi, as is his wont, conveniently twists the truth: the rallies are not against the refugees from the neighbouring countries. They are against hisgovernment for using religionand cherry picking who can become an Indian citizen – Hindus, Sikhs, Budhists,Christians and Jains--, and who cannot …
Post a Comment
Read more


Indians on the streets is all about wanting to reclaim our idea of India, seen to be under stress and threat. In his characteristic way,  the unorthodox Carnatic singer T M Krishna gave vocal and musical support to that effort at reclaiming India. He went beyond, emphasizing on the need to reclaim our National Anthem, Rama, Allah and our public spaces that are being violated in the name of development under the Make in India programme.
The Magsaysay awardee’s concert was part of the Jashn-e-Noor organized by the Safdar Hashmi Memorial Trust and Sahmat on the first day of 2020, which also marked the 31st death anniversary of Hashmi. The political activist and theatre allrounder was attacked by  Congress lumpens in Ghaziabad, as his street play “Hallo Bol”, exhorting people to raise their voice, was being performed.
Krishna punctuated his call for this reclaimingwith songs that fit his theme.
“Thereare two…
Post a Comment
Read more 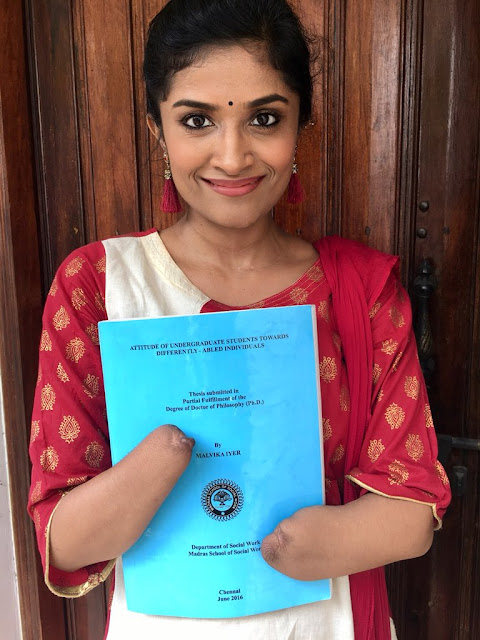 
Dr Malvika Iyer , a bomb blast survivor , is a motivational speaker and disability activist. Using the PM’s handle, @MalvikaIyer tweeted, “ People with disabilities should have equal representation—be it media, politics or any other field. The more we see them, the more we accept them as part of our society. Representation is key.”
Malvika  wrote, “Acceptance is the greatest reward we can give to ourselves. We can’t control our lives but we surely can control our attitude towards life. At the end of the day, it is how we survive our challenges that matters most.” The suspense was finally  over at 11 am on Sunday,  when PrimeMinister Narendra Modi signed off his social media accounts for the day, and what we saw by way of tweets from @narendramodi were hashtagged #SheInspiresUs. And seven women got to spread the message of their passion and work, using the @narendramodi handle.
None of them is a name that we can immediately place or connect with. Their cause, and thei…
Read more


When India celebrated her 70th Independence Day, television channels showed a hauntingly different yet familiar, soothing version of "Jana Gana Mana". The National Anthem was sung by a choir from the North East, and the person behind it was Vandana Kohli.

Yet there are many who will associate Vandana  with anger. At a time when the  real PDA --Public Display of Anger -- be it on the roads, at home, in schools, why...even in the highest institution of our democracy , is constantly on the rise , Vandana has made it her own subject thanks to her  award winning documentary on anger . Every frame in it gets more and more r…
Read more


Whispering is generally about sweet nothingsthat are romantic; gossip that is interesting but not necessarily relevant or true; and the game called Chinese whisper-- a game in which a statement gets distorted as each player whispers it into the ears of another.
Covid 19 , originated in China , now requires us to whisper---well almost whisper—whether or not it is romantic, gossip or not a game.
One of the important toolswe need to succeed in our battle against the novel corona virus, is to lower our volume, and speak softly, very softly.
Thenation-wide lockdown that began on March25 was used as much to ramp up our health facilities for Covid patients as to educate people on how to fight it at an individual and community level. Every Indian knows the importance ofhand washing, wearing a mask, social distancing and staying at home. But there is a crucial message the government has failed to convey, or at best, whispered. And that is to speak softly.
Whether we are speak…
Read more