CAA a costly way of distracting people from the economic reality 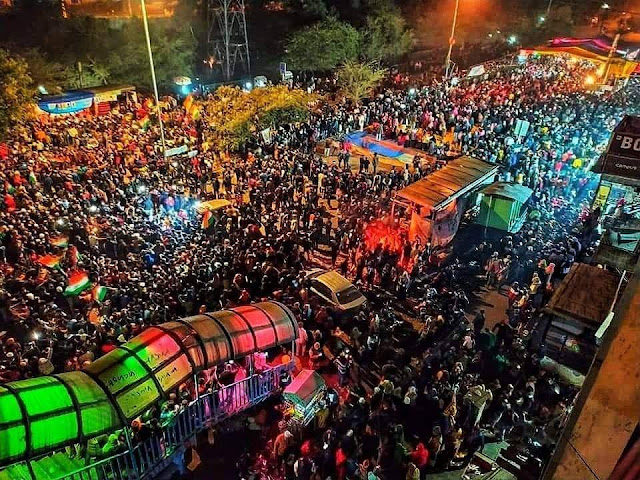 Shaheen Bagh is no longer just another Delhi locality. It has come to represent,  globally, people' s spontaneous protest-- without leaders, without political support and  without party leanings. The extent of the protest, the spread effect, the duration,the struggle , the resistance , the participation of students, youth and women  all make it a movement with a difference.

And Shaheen Bagh gives face, body and human touch to a non-violent resistance by the people, a first  in independent India. Even our freedom movement had Mahatma Gandhi and others. This has none. A few leaders who have gone there, have gone largely to see in order to believe how dispensable they have become.

We have to thank this government for Shaheen Bagh, that has added  muscle to our democracy, and shown there is an army without the olive greens too, standing to defend the Constitution. Shaheen Bagh happened  because of the CAA and the NRC.

Prime Minister Narendra Modi on Monday said no matter what the protests, they would go ahead with their work—in a veiled reference to the CAA.

What if there had been no CAA? The economy would be the focus. The CAA and the protests have succeeded in distracting the people from reacting to the mess that is the economy: just today, the International Monetary Fund has trimmed India’s  growth estimate to 4.8 % for 2019.

The  huge cost of that distraction has been the battering that the image of India has taken globally. Many world leaders cancelled scheduled visits.

Without rolling back the CAA, the only option  for India is to turn into an ostrich. Or believe that the world including the Indian diaspora doesn't care about the CAA, doesn’t believe the image of their motherland has been tarnished. Never mind what Microsoft CEO Satya Nadella says.

If on the contrary, the government had drafted the bill leaving out the contentious and discriminatory clause? India would have come out as a large hearted big brother in the region. With the cut off year for the citizenship under the new law being 2014, the task would have been to seal further immigration and identify and send back those who came in after 2014.

Of course there would have been  a reaction, possibly violent, from the saffron brigades. But given the law would  be in line with the Constitution, Prime Minister Modi and Home Minister Amit Shah will need only to explain the Constitution to them. And  may be end ministers, rope in the RSS etc to explain the law to their shakhas, workers, youth, student and mahila wing etc.

Had the discriminatory clause not been part of the law, the PM would  have risen from a pracharak, to a statesman like no other Indian. Modi had the option, but has missed that golden opportunity.

But to reach that height, the prime minister would have had to say no to this goal of his party and its ideological parent, the RSS.
Constitution Economy Prime Minister Narendra Modi RSS Shaheen Bagh