Modi on way to building his "New India"

When Narendra Modi, as the BJP's prime ministerial candidate, said he would transform India, people were delighted. He even clarified it in three simple words in Hindi. Achche din aayenge. Goodtimes will come. While people are waiting for transformation in terms of better life and livelihoods,  he has begun working on transforming India to what he visualises it.

He  has displayed  little pride in what the  diverse, multicultural and plural India of today is ; in small measure he gloats over what is believed to be the culture of this ancient land – way before it took the form of modern day India, formed by the integration of many small and not so small kingdoms and principalities soon after freedom and partition in 1947. And there has been a lot of talk of his vision of India, rather “New India”.

When the prime minister first mentioned “New India”, most of us thought it was about improving the lives of the people, with the help of technology, new manufacturing facilities, more world class schools , colleges, universities and  advanced research institutes. And given Modi had waxed eloquent about building the world’s tallest statue – of Sardar Patel, which they had already started constructing in Gujarat before he became Prime Minister of India – we expected  one or two more such humungus show pieces to leave as his footprint in the country.

Who would have thought that the Moghuls the RSS claims marauded over temples to build mosques would inspire Modi? Yes, that just seems to be what he intends doing.

Demolishing or redesigning most of the heritage structures in the national capital, and having in their place buildings that would be contemporary, and definitely have a foundation stone/inauguration slab bearing Prime Minister Narendra Modi’s name etched therein. He may at times share them with whoever is the President of India then, and his best buddy, right hand man and Man Friday, Home Minister Amit Shah.

Modi started out in small and insignificant ways that were meant to have a positive impact on governance. He replaced the institution called Planning Commission housed in what was called the Yojana Bhavan, with NITI Aayog –the National Institution for Transforming India- and the building also got a new name: Niti Aayog.

The Race Course Road , where the prime minister of India lives (Dr Manmohan Singh lived there) became “Lok Kalyan Marg” – Publc Welfare Road  under Modi.
When the people’s president, Dr Abdul Kalam passed away, Aurangzeb Road became Dr Kalam Road, possibly because among the Moghuls, Aurangzeb seems to have been the least popular.

It is not that the Congress did not tinker with names. They tried to rename Connaught Place, modeled after the Royal Crescent in Bath, UK, as Indira Chowk (outer circle) and Rajiv Chowk(inner circle). But everyone knows that was blatant sycophancy on the part of the Gandhi worshippers, and not intended to rewrite history. But the RSS, BJP, Modi and Shah must have realized that no matter what the UPA government did , people know Connaught Place, named after the Duke of Connaught in  as just that , and fondly call it CP ! Rajiv Chowk is a metro station, and Indira Chowk, not even a signpost anywhere.

Then the Teen Murti Bhavan caught the NDA government’s eye. What was the Flagstaff House in 1930 and became the Prime Minister’s House after 1947—Jawaharlal Nehru lived and died there—now houses the Nehru Memorial Museum and Library. Voices in this government have often asked why Nehru? Why should it not be memorial to all the past prime ministers? But so far they have let that be.

Most of the welfare programmes named after former prime ministers Jawaharlal Nehru, Indira Gandhi and Rajiv Gandhi have been renamed: after members of the saffron pantheon—Atal Behari Vajpayee (not a soul has expressed a word against that, not the Left, not the Congress),Deendayal Upadhyaya, Veer Savarkar and others. The catch here is they presented it as their own, and did not give credit where it was due –primarily Dr Manmohan Singh and P V Narasimha Rao!

The Modi government then had the iconic Hall of Nations (and Industries) in the Pragati Maidan pulled down a couple of years ago. It was built to mark 25 years of Independence, and used by different countries that participated in the World Trade Fair held annually by the India Trade Promotion Council, as well as other international fairs.

Now the government has decided to redesign the Central Vista along Raj Path. For those not familiar with Lutyens’ Delhi, it is the stretch between the famous and iconic India Gate and the Rashtrapati Bhavan atop the  Raisina Hill. The contract has been handed out – a firm based out of Gujarat has bagged it.

As heritage lovers and historians have knocked at the Supreme Court, we hear they will not tamper with some of the breath taking buildings – the Rashtrapati Bhavan, the Parliament, North Block and South Block, though they will all play a new role. But many will be razed to rubble. The MPs, bureaucrats, ministries will find a new home somewhere on this road. And apparently a house for the Prime Minister  of New India is being planned  next to the Rashtrapati Bhavan !

The  Republic Day parade will give  TV viewers an opportunity to see the Central Vista that the free oxygen spa for the lesser mortals of India’s capital. 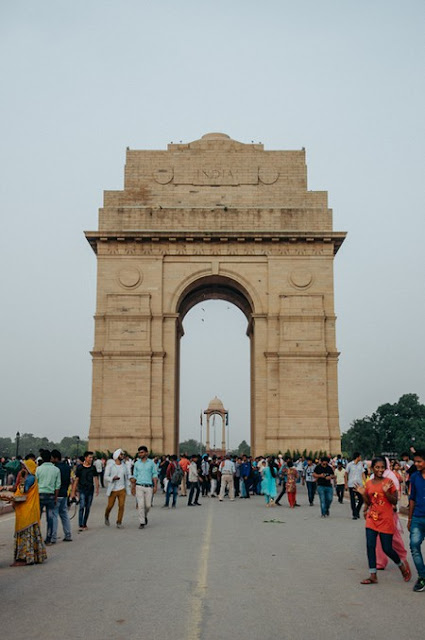