Our 71st  Republic Day is  the perfect time to set a  new goal that may be even tougher than fighting to defend our Constitution and all that it offers us. To reclaim clean politics. And start with conduct towards rivals.

Indian politics has so degenerated over the last few decades that the major challenge has been to restore credibility in politics as well as politicians. Corruption ate into the system like termite. And as scam after scam came to light, there was a time when most young people preferred not only to stay away from it, but also stay away from voting. It was not just about the resources that were pocketed by politicians. It is also on account of  the gutter level to which politicial discourse had fallen, complete with the language they used particularly when discussing their rivals . Political rivals or opponents are projected more like enemies to be shot down. But the Indian voters have always stood their ground, and showed that they, and not politicians of any particular party, call the shots.

A couple of examples of good politics come to mind.

"When Rajiv Gandhi was the Prime Minister, he somehow found out I had a kidney problem and needed treatment abroad. One day he called me to his office and said he was going to include me in India's delegation to the UN and hoped I would use the opportunity to get the treatment I needed. I went to New York and that is one reason I am alive today,” Atal Bihari Vajpayee, who was then a member of the Rajya Sabha, has been quoted in a book.

Prime Minister Narendra Modi on January 23, 2016, declassified the ‘Netaji Files’ that were gathering dust in the vaults of the PMO and the Ministry of External affairs.

There was heightened anxiety to read the files with the general expectation that they would adduce evidence that Jawahar Lal Nehru and Mahatma Gandhi had got Bose killed. In fact there was also widespread suspicion that this “evidence” was why the files were never made public.

Even as Modi tries to delete the Nehru stamp on independent India, the files revealed a rare and humane relationship between India’s first Prime Minister Jawahar Lal Nehru and Netaji Subhash Chandra Bose. It hardly seemed to be a story of two rivals in the leadership space ahead of Freedom. 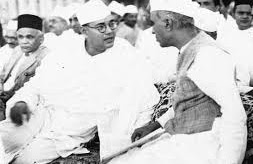 Amiya Nath Bose, son of Netaji’s brother, Sarat Chandra Bose, wrote to Nehru in 1952, saying: “I want to send, from time to time, small sums of money to my aunt in Vienna. If I proceed through the Reserve Bank of India and the Austrian National Bank, the latter may raise objections and create complications. I should therefore like to know if it can be arranged that I hand over the money to the foreign office in Calcutta and the vice-consul in Vienna passes on its equivalent in Austrian currency to her.”

Amiya’s aunt was Netaji’s wife, Emilie Schenkl. From then on, it was Nehru , as Congress president, through the AICC and one time  West Bengal Chief Minister, Bidhan Chandra Roy, who ensured Emilie and Bose’s daughter Anita were never short of resources. The declassified documents point to Nehru suggesting that some tea be sent for them, the diverse channels through which the foreign exchange was sent, and also how Anita was later received in Delhi. Equally, the files reveal how Bose received and escorted an ailing Kamala Nehru to the TB sanatorium in Switzerland, and was by Nehru’s side when Kamala passed away .

That kind of clean politics --as opposed to petty politics -- is apparently too too much to expect in New India. But as one generation gives way to another, one would like to remain optimistic—that we can reclaim clean politics, beginning with conduct.