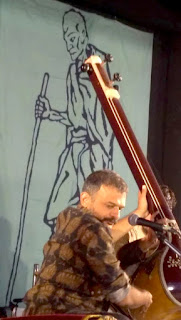 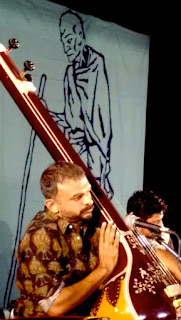 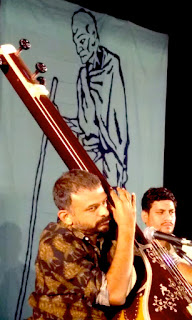 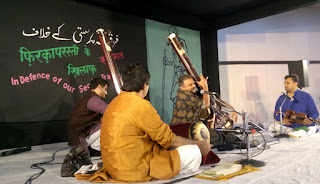 Indians on the streets is all about wanting to reclaim our idea of India, seen to be under stress and threat. In his characteristic way,  the unorthodox Carnatic singer T M Krishna gave vocal and musical support to that effort at reclaiming India. He went beyond, emphasizing on the need to reclaim our National Anthem, Rama, Allah and our public spaces that are being violated in the name of development under the Make in India programme.

The Magsaysay awardee’s concert was part of the Jashn-e-Noor organized by the Safdar Hashmi Memorial Trust and Sahmat on the first day of 2020, which also marked the 31st death anniversary of Hashmi. The political activist and theatre allrounder was attacked by  Congress lumpens in Ghaziabad, as his street play “Hallo Bol”, exhorting people to raise their voice, was being performed.

Krishna punctuated his call for this reclaiming  with songs that fit his theme.

“There  are two parts to the discourse. One is the reclaiming of what we believe is this complex, incredibly crazy, incredibly beautiful, warm, embracing messy country we call India” he began.  But going beyond reclaiming that space with all its diversities, the discourse , in his view, was also about reclaiming “many things that  we may not believe in”, given the many different shades to what India is.

“We may not want to claim  them because of our own philosophical and political outlook. But may be it is also time to traverse those boundaries and claim those things as long as they are embedded in fundamentally what is India, which is enshrined in the Preamble of the Constitution”, he told the crowd of largely very young people as well as the who’s who of the  world of progressive left and liberal intellectuals, theatre personalities, writers, activists and teachers of the national capital.

The venue was the annexe  of the Constitution Club in Lutyens’ Delhi. Many who had come to hear him were relieved that Krishna did not face the hostile Central government the way he did a few years ago. That time the Kejriwal government in the National Capital Territory ensured he got a stage in the lovely and spacious Nehru Park where the turnout was the more because of the Modi government’s effort to stifle Krishna’s voice. 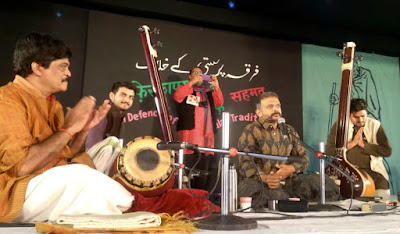 Krishna spoke of  the need to embrace “those things we have limited ourselves from embracing”, and also the need to keep asking difficult questions, and not stopping there. Ask the questions in all the different ways we can—through music, dance, drama, writing or even just standing on the street,  he said.

The stage backdrop had a sketch of Mahatma Gandhi with his walking stick, and the slogan read, “In Defence of Our Secular Tradition” Posters on the walls quoted Gandhi saying “Non cooperation with evil is as much a duty as cooperation with good”, and Brecht saying “This is the year which people will talk about, This is the year which people will be silent about”

He may not have reclaimed the national song, but without making the audience jump to attention he had them wonderstuck and moved at once. What he sang  in a deeply  felt way, almost caressing the song was a melodious Rabindra Sangeet of verses from Tagore’s original in Bangla. Krishna interrupted himself to point out the paragraphs that referred to North East, which were not part of our national anthem.

Allah reclaiming, came in the form of the song made famous by another doyen of Carnatic music—Yeshudas. The Arabic song “Sanatullah “ in Raga Bhaivari left many not so familiar with the South Indian musical tradition, stunned.

With Mahatma Gandhi in the backdrop, “Vaishnava Janato “ it had to be for communal harmony. Vaishnava Janato became inclusive, with Muslim Janato, Parsi Janato, Christuva Janato, Buddha Janato, Jaina Janato etc. Referring to his own excitement and delight when he discovered that this was the way Bapu’s favourite song was sung at the Sabarmati ashram, Krishna sang it part in Carnatic style, and part the usual, familiar way.

Power. That was what he packed into his translation of   a composition by the very understated voice of resistance and dissent—Perumal Murugan. The Tamil writer who has been widely translated into English and other languages, Krishna said, took almost a year to wrap up the few verses on the evil of   manual scavenging, in the context of Swacha Bharat Abhiyan
(That will form a later day post, perhaps with no comments or views other than those of Perumal Murugan )

Krishna’s rendering of a composition by the Lingayat saint poet Basava was hauntingly familiar to the youth and adults alike. It could well have been a part Carnatic version of “Tumhi ho mata, pita tumhi ho”. As he told the audience, the Raga Hansadhwani had travelled from the south to the north.

The idea of language and diversity within it, was the context for  his very popular “Poramboku”, set in the backdrop of new power plants that came up in Ennore, swallowing lakes and parts of the sea, as it were. That was the take on Make in India,  that left people homeless and jobless.

If it can happen there, it can happen here, anywhere.
What a creative protest against all that is happening in the country today!