When India celebrated her 70th Independence Day, television channels showed a hauntingly different yet familiar, soothing version of "Jana Gana Mana". The National Anthem was sung by a choir from the North East, and the person behind it was Vandana Kohli.

Yet there are many who will associate Vandana  with anger. At a time when the  real PDA --Public Display of Anger -- be it on the roads, at home, in schools, why...even in the highest institution of our democracy , is constantly on the rise , Vandana has made it her own subject thanks to her  award winning documentary on anger . Every frame in it gets more and more relevant with every passing day. 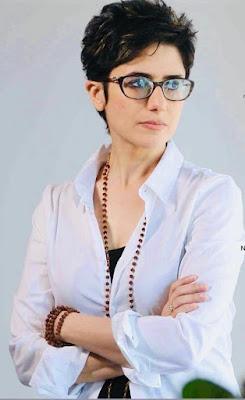 "The Subtext of Anger", which has bagged many awards over the years,  is an essay in film that explores the emotion, expression and root causes that drive us to anger. In fact it really  begins when the hour long film ends. For that is when the discussion around anger begins, as the film maker conducts a session on "Understanding and Managing Anger and Stress".

The documentary leaves the audience totally shaken up, almost everyone  relates to it, sees something of oneself in it. But as she encourages people to  unwind and share their concerns over their anger,  asks gentle questions that nudge them to open up, and presents an "answer", the atmosphere in the hall lightens palpably.

The impact of the film lingers on for long after people have gone home, but it is neither scary nor stressful. It is to ensure such an  experience and absorption of the documentary that Vandana has not uploaded it on YouTube, but  screens it to groups that could be as small as 15 people, and invariably has a discussion on the subject once the lights come on. It is her way of making people understand and manage their anger.

What makes people ever so angry these days? Is there any way of controlling anger?
Here is the link to a conversation with the film maker who has dived deep into the subject of anger, and believes it is not a bad emotion after all!