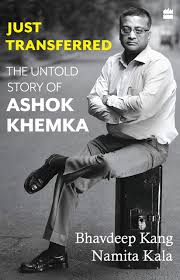 If one were to read those two words as the headline in the pages of newspapers coming out from Punjab or Haryana, one cannot be faulted for concluding that it will be about Ashok Khemka, the IAS officer from the Haryana cadre.

He has been transferred 53 times in  27 years, and almost every new posting was because  the political bosses of the day found it inconvenient to keep him there. Khemka's honesty was simply not working for them.

Transfer and posting is one of the tools in the hands of government and political leadership. It is through this the system rewards and promotes those who perform or go along with the flow, ignores the non-performers.  And it is used to  harass those who work by the law and their conscience, are wedded to integrity and committed to fight corruption wherever they see it. That is why the Personnel Department that issues the transfer and posting orders is always retained by the Prime Minister or Chief Ministers.

But this "Just transferred" is not a headline about one more posting for Khemka. It is a book published by Harper Collins, and the title is "Just Transferred: The Untold Story of Ashok Khemka" and the authors are Bhavdeep Kang and Namita Kala.

Khemka was  known  for his  integrity in the bureaucratic circles of Chandigarh  long before it spread countrywide in  October 2012. He was transferred out of the office  director general of consolidation of land holdings and land records,Haryana , exactly 80 days after he assumed the charge. It was immediately after he blew the whistle on a questionable land deal wherein an overenthusiastic Bhupendra Singh Hooda led Congress government worked overtime to ensure Robert Vadra got Change of Land Use to colonise cheap agriculture land in the National Capital Region. Overnight Vadra benefited by way of crores of rupees in resale.

Post the Vadra expose, Khemka  was transferred and posted  MD,Haryana Seeds Development Corporation , but shifted a 150 days later! He had unearthed misappropriation in subsidies and filed a case before the CBI.

When I met him around then, he was  posted in  the archives department, where there was no office room befitting his seniority and rank. He was denied an experienced stenographer, shared someone's peon and the office did not have basic stationery or computer.

Worse was  the manner in which Khemka  was relieved. His successor was  an Under Secretary, five levels below his own as secretary to the government,  arrived to take charge even before Khemka had got  his transfer order. In fact, he was asked to download it from the government’s website!

The officer took all the transfers in his stride, found work in every posting that in Chandigarh is called "khudda line posting"-- a dumping ground, just to ensure an officer vegetates without work that can be shown. But Khemka found work every where, and the countless transfers are telling evidence of this.


Throughout the interview, there was no bitterness , frustration or anger in his language or facial expression. There was no gesticulation, nor did he raise his voice for emphasis. He might as well have been telling a simple story calmly.

I could not resist asking him why in the circumstances he was continuing  in the service. With his qualifications and experience, he could have had the job of his choice, and possibly much more money.

His reply rings in my ears whenever he makes news. " The IAS still offers you the best chance to serve the nation, fight corruption, serve the people.Nothing else does it this much,--not even politics".

Every page of "Just Transferred " will be worth reading.