Give credit where it is due, BJP 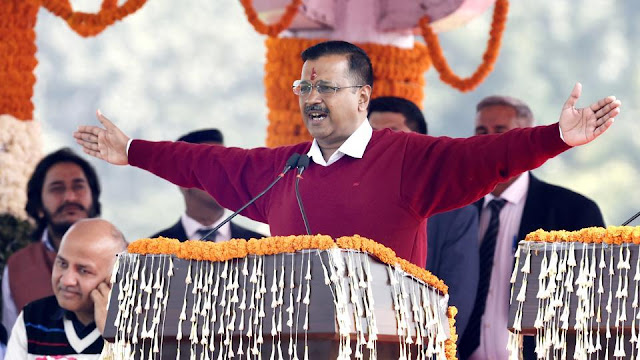 One week after the Delhi assembly elections,as Arvvind Kejriwal took oath as the chief minister for the third time, the Bharatiya Janata Party has been half-hearted in congratulating the Aam Aadmi Party,full throated in boasting about its increased vote share, and less than pragmatic in analyzing what led to Kejriwal’s win. What led to their loss will doubtless be analysed in house, and where it begins came in Union Home Minister Amit Shah admitting that “Goli Maro “ and”Indo-Pak test match” hurt the party.

Many BJP leaders have attributed the win to the free water and subsidized electricity as “freebies”. “In the Delhi elections, issues were lost and freebies won” said the Haryana Home Minister Anil Vij. Strange, he has forgotten that the BJP with the Lok Dal of the yore swept the Haryana assembly elections for the first time—reducing the opposition Congress to 5 in an assembly of 90,promising “Karza Maaf”. Loans of all the farmers of  the state were waived off with one signature of then chief minister Devi Lal even as everyone cried it will ruin the financial discipline of farmers! Think of it, there was nothing like farmer suicide in the disciplined days before that.

What  that alliance then, and many others have done in the name of welfare measures, is just what Chief Minister Kejriwal has done in the capital. It cannot be that it is welfare when the  BJP does it, and freebies when Kejriwal does it.In fact, the BJP said they would continue with the Kejriwal schemes if elected to power!

Prime Minister Narendra Modi added to theBJP  strength in the Lok Sabha  in May 2019, as much because of  the  freebies in the guise of welfare measures in the previous term.

It may be argued that these schemes of Modi government  were targeted to the poor and needy, while the AAP in Delhi gave the benefit of water and subsidised electricity to most residents. Fact is, in Delhi, the chief minister could do it. In many states  farmers get free power, while domestic consumers pay a very  high  tarifff , thus paying for the cross subsidy.

Even the most generous Indian must feel the pinch of being used to pay for such subsidies, which is why Kejriwal, formerly from the IIT and the Indian Revenue Service, decided to distribute the electricity subsidy to all--leaving very few. This is the nearest a state has come to implementing a version of the Universal Basic Income, still a work in progress in many countries including India.

Interestingly, the Economic Survey 2017 has  pages and pages on the idea of Universal Basic Income. It is about giving every Indian, including Anil Ambani, Adani, Sunil Bharti Mittal and others, the same amount of money every month, to do what they want. It looked at the option of subsuming other subsidies either totally or partly, or excluding some people for now. The Survey eventually suggested that the time had not come for that idea in India yet.

Thre "freebies" apart, many BJP leaders used the word "smart" and "clever" in a derrogatory sense, and linked the Shaheen Bagh protest to Kejriwal's victory. In a television debate, BJP leader Lalitha Kumaramangal attributed the AAP victory to the protest by the women, and said, " The women of Shaheen Bagh were taken for a ride. I don’t think they even realised  how they were being used. It was a good strategy by the Opposition and they have won” Her grouse was that Kejriwal did not go to the protest venue, and thus demonstrated that it was not "a real secular campaign" ." It’s happened, it’s done, it’s good strategy and they won", she elaborated.

Of course it was smart on Kejriwal's part that he did not fall into the trap BJP tried to lay for him, but why should they think the opposition is a bunch of fools !

And arguing along the same "secular vs communal" lines, they ranted over the Delhi chief minister's visit to a temple. There are few Indian politicians who have not done this, and quietly --the way it should be.

But  the party would do well to listen to the new view of the most powerful man: that their  offensive and abrasive language has hurt . Apparently, they are trying to do that, given Bihar elections as well as polls in West Bengal, are not far away. On Saturday, BJP president J P Nadda pulled up Union minister for animal husbandry, Giriraj Singh who is known for his hate speeches: this time he referred to the  seminary at Deoband as a source of terrorism..

Equally, they should relook at the AAP strategy-- of non-discriminatory distribution of some essential resources. Even those who pay around Rs 6000 + a month for electricity in Delhi, were delighted at the 800 rupees deduction they got!