In the name of booth level campaign 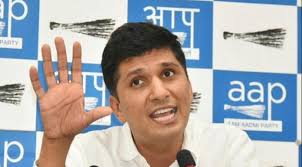 “There a guy will come and tell them, you know how the Hindus are increasing in numbers..and you know how the Muslim population is growing? At this rate, Muslims will become more than Hindus, and you know what will happen to the country? Five years later, Muslims will outnumber Hindus, this country will belong to the Muslims. Your daughters will be raped in their own homes. You know where this country will reach? You are selling your country for 200 units of electricity? You are selling your dharam? Are you a Hindu or what? The atmosphere gets charged, and they will all be hypnotized. The moment that happens, they will give them pouches of Ganga water, and say, khao kasam (swear ,take oath, promise) we are Hindus, “khao kasam hum Hindu hain. Aur khao kasam jo Hindu hai woh BJP ko vote dega”. And everyone will take that oath. And then they are in a moral and religious dilemma, feel we have taken this oath, so we have to give our vote to the BJP”

That was how AAP MLA Saurabha Bhardwaj described on a television channel, the BJP's  door to door campaign about 20 days before the polling . It  is about getting a family or two, a total of about 10 people in a house before the above scenario unfolds.

On polling day, right at the barricades, they raise slogans of Jai Sri Ram, and remind the voters they are Hindus! Bhardwaj confessed in a different show that  AAP supporters responded, saying Jai Bajrang Bali.

A bit dramatized may be, but the story is not to be discounted as pure fiction.

It was in the summer of 2014, when I had gone to Varanasi to cover the campaign of BJP’s prime ministerial candidate Narendra Modi. With less than a month to go for polling, there was not a sign of elections in the air ! Not a banner,no streamer, no poster. No carcade or rickshaw with a loudspeaker blaring any campaign talk. But there was a buzz about Modi, and people were talking –ONLY-about him.

Still looking for signs of campaign, we broke for lunch at Jaipuria Bhavan, a simple dharamshala that visitors to Varanasi never forget. It offers the best vegetarian meal, fresh from the kitchen, served with dollops of heartfeltness, while you are seated on the floor, the traditional way. Hardly had we washed our hands, and we heard a very resounding “Vande Mataram” right from within the building!

I charged to the person who seemed to be in charge, and asked where that “Vande Mataram” was coming from. He said there was an “election meeting”.

A half an hour later, a group of about 30 people, neatly dressed in white pyjama kurtas or blue denims and white kurta, with a saffron or red”gamcha” round their neck, trooped out. Some of them sported red tilaks on their forehead, all of them were disciplined, and spoke to each other very softly—there was nothing I could overhear and take notes! On approaching one of them, we were told to wait for “Shekharji”. Chandrashekhar, who made his appearance a bit later, was the Organisation secretary of the BJP’s Benares zone unit. The “organization secretary” posts at all levels in the saffron party are generally manned by RSS pracharaks. He had 14 districts under his watch, and said he was too busy with work, so could not talk!

“We are the campaign, don’t look for posters etc.,” said one of that group, later on the road outside. He described small groups, door to door, family visits etc, just the way Saurabh Bhardwaj of the AAP had put it. When they go to such small meetings, “we talk about family matters”. Prodded, he said they tell the voters about Modi being a “vikas purush”.And in no time, they organized an election atmosphere for our photo shoot!!

So, the setting for sure was not made up by Bhardwaj. 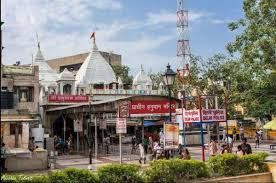 When Delhi chief minister Arvind Kejriwal visited the Hanuman Temple or recited the Hanuman Chalisa, he was doing what millions of Indians do, daily or weekly, very unconsciously, and without any show.

Consulting astrologers and panditjis, making huge offerings at temples they visit, are what Indian politicians have been doing for decades, cutting across parties and ideologies. Because that is a matter of faith, and elections are like exams they want to pass. Hopefully, it is not competitive politics. Nor is it soft Hindutva. It is just their way of life.

Hinduism and members of the Hindu pantheon do not belong to the BJP, the RSS .
A battle to reclaim this ancient religion from the grasp of rabid communal people would indeed be the next Mahabharata that needs to be fought . Not in this era or century, but this decade.
AAP BJP Hanuman Hindu Saurabh Bhardwaj