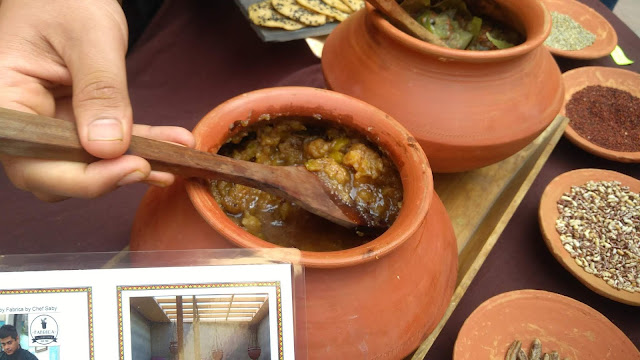 What if we had guests from the Harappan civilization around 5000 years ago? Much as the world has changed even in the last 50 years, these ancestors of ours would find one thing quite familiar. The food.

“It  speaks about the strength of Indian food systems. From the Harappan times to now, we continue to predominantly follow the same pattern which is remarkable. World over the food habits have changed ..if you go to UK, the food is so bland, all they make is potatoes, potatoes and 20 more varieties of potatoes.  And look at the food system here, what a rich and diverse , so powerful that people still continue to  follow that,”says agriculture and food policy specialist Devinder Sharma, pointing out that any Indian thali would still contain many ingredients they used back then, and in rural India and traditional homes,

People are realizing the importance of the strength of our ancient systems, and that these were  scientific and good for the environment. It is also a time perfected system .


If the Indus Valley food system can survive for so many centuries it is a classic example of how sustainable and relevant it is, despite the changing times.

The venue is the National Museum in Delhi, where “Historical Gastronomica”, an exhibition  jointly with One Station Million Stories , is currently on. It  takes visitors through a journey of  how people in areas that are now Punjab, Haryana, small parts of Western Uttar Pradesh, Rajasthan, and Gujarat—as well as in parts that are now in Pakistan – farmed and cooked five to six millennia ago.

The highlight  of the exhibition is the Indus Dining Experience, with a specially crafted menu whose ingredients have been identified by archeologists as present at the Indus-Saraswanti civilization sites,and consumed by the people. 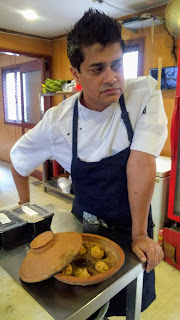 “This is all we have in my vegetable pantry, and these are the grains we have,” says celebrity and award winning Chef Saby.

When you go back to between 2000 and 4000 BC, you find only that many vegetables and that many grains growing. And when you research for what grew then in the second half of February, the list shrinks that much more, he explains. Add to that the fact that  the government  knocked off the lamb,quail,fowl and country chicken  that were part of what the people of the Indus Valley civilization ate, the menu is not a huge spread. Some members of Parliament were against  meat  being served where sculptures of Hindu gods are aplenty. In spite of all that our ancestors would love our food !

Chef Saby has used black pepper, cumin and cinnamon in the knowledge that trade and movement of people were significant activities in the mature Harappan era, and they would doubtless have used these.

So what he has are carrots, cucumbers,raw and ripe bananas, brinjals. One big fat yam sits next to a bundle of garlic bulbs. “They grew grapes in winter” says the chef. The climate change notwithstanding, the roadside fruit vendors have begun selling grapes in the capital. Shiny green and glossy purple grapes are simmering away in a syrup of date palm jiggery.  He also has turmeric, a variety of corn, cholia,green gram, peas, chana dal. The humble potato or the essential onions are missing because they  made their way to the sub continent much, much, much later. No white rice either, but there are millets and hand pounded rice. “They” used sesame seeds of the black variety, as well as mustard seeds. So a drizzle of mustard oil or a fist full of sesame seeds on  palm-sized corn rotis – makki ki roti—and bajre ki roti are on display,as part of an Indus era menu. 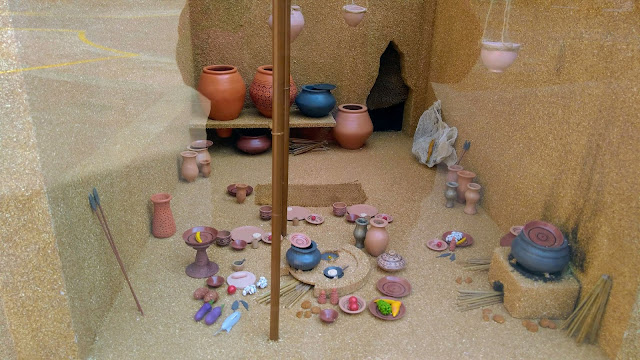 The kitchen has not got a make over  to look like the one in the  poster of a Harappan kitchen on display, but the effort has been to simulate the technicques, temperature and speed –slow—of cooking. The grapes, the dal, the assortment of vegetables, a couple of desserts—the grapes are one of them—are simmering in clay cookware. 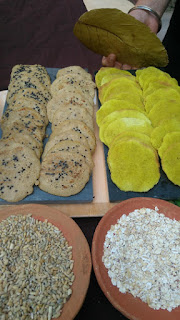 There is no chullah but  there is a wire mesh on the induction top, stones atop the mesh, and the earthen ware are placed on top of the stones. Whatever has to be baked go onto flat stone ware that go into an electric oven. Roasting,basting, steaming, slow-cooking,charring,dessicating, pickling--they did all that.The flour, the masala are all ground on stone or pounded by hand the way they did it back then, the Chef says, offering a tiny dona of “chocolate mousse that the Harappans ate”, with a laugh and a flourish. There is no chocolate, but it is wonderfully sweet with a delightful aroma—oats, cooked with dates with the pits, and a dash of cinnamon, he says. Could it be a version of  modern day “gur ki chawal”, “meethi chawal” or “shakkarai pongal”? Of course it is.

Chef Saby has been interested in cuisine of specific people and region for quite some time now. He’s done Parsi food, Armenian food . But his own work in deciding on the menu took him about ten days of reading up, while the organisers of the “Historical Gastronomica” shared a lot of material with him.

But a good look at the food makes it clear that our ancestors of the Harappan civilization, particularly the Indus-Saraswati civilization ate a lot of what we do in these areas today. Rather, we eat a lot of what they ate !

And  when  celebrity food, health and fitness experts push for the use of clay pots, iron “kadhai” and home made food,  they are essentially trying to take us back to the Indus times.
Chef Saby Devinder Sharma Harappan Kitchen Historical Gastronomica Indus Dining Experience National Museum New Delhi