Why BJP is fine with hate speech: it helps spread their ideology!

Public memory is short, it is said. That may not be true all the time, but some people’s memory is certainly selectively very short.

Almost 48 hours after the Delhi assembly election results were declared, Union Home Minister Amit Shah admitted that the “goli maaro, India-Pak” remarks “may have” been part of the reason the party was almost washed out in the National Capital Territory. The way Shah qualified this “may have”suggests it was a half hearted response to a pointed question at an event attended by many who will never be seen in Shah’s rallies.

“Nobody gave a statement that mothers and sisters would be raped. The other statements that you raised, they should not have been made. The party immediately distanced itself from them…party workers of every level are part of the election campaign. Some worker says something, but the public knows what the party is. The party’s official spokesperson, the party’s Parliamentary board, the party’s designated leaders, if you ignore their statements, and look at what anyone says… I am not saying that small people said this. But this cannot be the view of the BJP.” 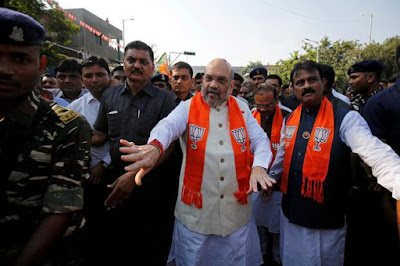 There are untruths in these sentences. First, that nobody said mothers and sisters would be raped. Strange that Shah is denying it when even  BJP MP Parvesh Sahib Singh Verma who  said that “they” (reference to Muslims and Shaheen Bagh) will enter your homes and rape your daughters and sisters, stubbornly stuck to his speech! At least he was not lying! The Election Commission noted his hate speech and banned him from campaigning for 48 hours

Second, it is not true that the party “distanced itself” from such a polarizing speech. "Goli Maro.." was incited by Minister of State for Finance, Anurag Thakur. The Election commission of India pulled him up for this. There was neither a statement from Shah who led the Delhi campaign for his party, nor any other spokesman that the party distances itself from such comments.

Distancing is conveniently turning a blind eye to such utterances. A condemnation of it should have been the first response to it, but there was silence. And when the Lok Sabha convened to discuss the President’s address, Verma defended the CAA, saying “this is not Rajiv Feroze Khan’s government, the CAA will not be rolled back”. Is his mischief lost on anyone? Banished from campaigning in Delhi, Verma used Parliament to continue his dirty campaign. And no senior leader in the party stopped him. And that definitely encouraged Verma and others to carry on.

Whether it was an unexpected communal outburst by Varun Gandhi many years ago, or the hate speeches of Anurag Thakur, and  Parvesh Verma, a pattern emerges. It is the speed with which senior leadership sees their value to the saffron party, because of the venom they can spew.There is an encouragement, a recognition that  these people know they will get.

Shah, in the course of his campaign, called Delhi chief minister Arvind Kejriwal , a liar, many times . Unfortunately, this was lost in the noise he made about Shaheen Bagh.Verma called Kejriwal a terrorist , and Prakash Javadekar senior leader and Union Minister for Environment, actually defended and endorsed  that ! Party MLA O P Sharma repeated that after the Delht voters had thrown their lot behind Kejriwal. Now where is BJP' s respect for the mandate of the voters?

Time was, not long ago, when the BJP veteran Lal Kishan Advani said they could have lost Lok Sabha 2009 because he had called then Prime minister Dr Manmohan Singh " the weakest" leader." I should not have said that", Advani said.

Time was, not long ago, when the Indian National Congress suspended it's senior leader and former cabinet rank minister Mani Shankar Aiyar for a derogatory reference to Prime Minister Narendra Modi. Aiyar' s explanation that he was unaware of the nuances of the words he used was brushed aside by the Congress.

Politicians have always been known to have a thick hide, and brush aside such hate speeches as part of the heat generated during elections. But young Indians have changed. They have acquired a certain polish thanks to education, and they have begun to expect certain levels of decency, thanks to the exposure.

Time now , that politicians begin to appreciate that. For that is one reason why the AAP won and BJP lost the capital.

But  not all that Shah said on Thursday was a lie. The BJP he said, did not contest elections, merely to win. The party believes in expanding its ideology through polls. In that light all the hate speeches __ including the calling  the Feb 8 polls an India_ Pakistan match__ must be justifiable for the party raised in the Hindu culture and RSS values.