A Congressman in the BJP compares the two parties 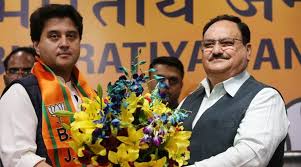 How does a man feel in the BJP after spending very many years  in the Congress?

On March 10, when Jyotiraditya Scindia resigned from the Indian National Congress his aunt Yashordhara Raje Scindia told a television channel that the decision would not only impact the Congress and the BJP, but also Jyotiraditya himself. The discussion was in the context of the loss for Congress and what he would take to the BJP table.

A long time close friend of  Rahul Gandhi, a former minister and an influential Congress leader, Jyotiraditya’s own world would indeed change , after he joined the rival BJP which he had publicly rubbished till a few days ago.

The saffron party’s president J P Nadda made the transition sound  light and easy by recalling the association of the Scindia family , beginning with his grandmother Vijaya Raje Scindia with the Janasangh and later became the BJP.That did not make the sombre Scindia smile. Possibly, it had been a difficult decision for him, but almost immediately after the formalities were done, Scindia's name appeared in the list of BJP candidates for the Rajya Sabha elections.

Even as he said he was grateful to the party for giving him a platform to serve the nation, Jyotiraditya indicated he  had left the Congress with a heavy heart on account of unkept promises –to the farmers, and the youth.

In BJP tradition, there was no opportunity to ask questions, so Jyotiraditya  was saved the embarassment of having  to reveal how many MLAs  would be with him as he helped the BJP topple the Congress  and form a BJP government in Madhya Pradesh . He was also spared having to talk about his own gains  – a Rajya Sabha seat, and possibly a cabinet berth later? 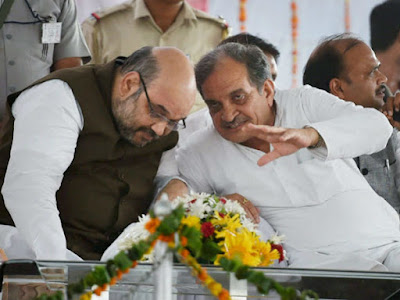 In mid 2018, I had interviewed a big Congress leader who had jumped ship similarly.
A very senior leader from Haryana, Chaudhary Birender Singh who had been a Haryana minister and a Central minister, gave up his Rajya Sabha membership (courtesy the Congress), resigned from the party, and joined the BJP the next day—29th August 2014.  Three months later, as BJP leader, he was both, a Member of the Rajya Sabha and the Union Minister for Steel.

He had a lineage no less than Jyotiraditya. Birender Singh’s grandfather was the legendary Jat leader, Sir Chhotu Ram. And Birender Singh had spent 42 years in the Congress !

By now  he had spent four years in the saffron party . I  asked him how comfortable he was in the BJP.

“Are you able to speak their tongue, because  there is a lot of difference between their language and yours?” I suggested.

And this is what he had to say, with a laugh.

“ The Congress is altogether different, it is a  movement .Individual does matter. Everything works in a movement.(sab kuch chalta hai) It is not like that in the BJP. Not just in the BJP, it is not like that  in any cadre based party. This   has its own merits and demerits.” That is probably why individuals, particularly influential senior leaders jumping ship still shocks the Congress.

“I feel that  there is  a lot of importance here in the BJP for the workers, and it is because of them that the BJP has become a pan-India party,” he said, elaborating on what the BJP had gained by being a cadre-based party.

But he personally did not agree with the BJP’s  self-view that individuals don’t matter in it, he said, giving the example of Narendra Modi.

“When Modi was projected   as the chief campaigner for the party in 2013,the electorate of this country –who were giving a fractured mandate for the last 24 years, for the first time the realized that here is a leader, give him chance, and with his leadership the BJP managed 283 seats of its own. Why didn’t the party get that many seats before?”

Of course, he was referring to the total failure that Rahul Gandhi is.

Birender Singh who stepped back from seeking a ticket in 2019 Lok Sabha, in favour of son Brijendra Singh, then an IAS officer, observed, “ Indians are prone to hero worship leaders, so one has to be  a hero. On the other hand the Congress did not project a hero who can attract crowds .This is the difference.”

The Congressman turned BJP leader is emphatic that the BJP, for the first time got a tag of a pan India party because of one individual. He believes it is good for the parliamentary democracy of our country because, “what I apprehend is, the more important the  regional parties get, the poorer will be our parliamentary democracy.

I asked him whether he had switched because he was denied the chance to be chief minister of Haryana –something everyone in Haryana knows. He did not answer directly, but quoted his grandfather.

“If a political person does not dream of moving forward, growing bigger, he can do nothing!”

That answers why Jyotiraditya Scinda began to feel stifled in the Congress. Rahul Gandhi and  his own ambition.