Ram , the man of the moment

Uttar Pradesh Chief Minister Yogi Adityanath  began his lockdown and social distancing at Ayodhya. In defiance of Prime Minister Narendra Modi’s direction to hold all religious gatherings in abeyance and work from home during the three weeks , Adityanath  participated in an event to shift the idol of Lord Ram to a temporary structure in the Janmabhoomi compound at Ayodhya, pending the construction of the grand temple.

We will know  in due course how many people watched it this morning,and whether the viewers were just nostalgic oldies or had a sprinkling of curious, story hungry, or bored young ones staying at home!

The serial, when originally telecast, mesmerized the nation .Most of India wore the kind of look it wears today—people stayed home, on their own, and remained glued to the television. The TV had not reached every household, so some people would be at their neighbour’s.

Enterprising people ticketed the show for a community; some residential communities placed a tv at a common point. Hindi cinema has shown crowds watching Ramanand Sagar’s Ramayan on small black and white tv placed on counters outside shops. India came to a standstill when yesteryear actor and “evergreen” Ashok Kumar anchored it, and people caught a glimpse of character actor Lalitha Pawar as Manthara or  legendary wrestler-actor  Dara Singh as Hanuman.

It was a sure shot way of holding an audience captive. Political rallies in Haryana used the chartbusting serial to the hilt. Organisers screened this version of the Ramayana on dozens of screens fixed on the poles erected to hold the shamiana as north India scorched in temperatures of over 40 degrees C. Multimedia screens of then were nowhere like they are today, yet the strain of “Sita Ram charit  ati paavan…” attracted  crowds  jostling to grab a vantage position. Thus the stage was warmed for the main speakers.

Some of the main cast  in the epic serial went on to become leaders in their own right.  “Sita”—Deepika Chikhalia, became a religious icon, and the BJP fielded her for the Lok Sabha elections from Baroda in 1991. Of course she became an MP.

Now the Modi government is hoping to use the serial , based on Valmiki’s Ramayan and Tulsidas’ Ramcharitmanas to make  a few hours of the lockdown easy for the people. This battle of “dharm vs adharm” is different from the battle of man versus covid19, but both are about man,evil and earth! 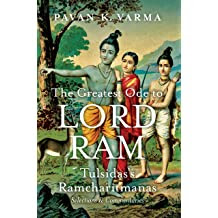 Ram is also the man of the season for other reasons.

“ A devoted son, a loving sibling, a committed lover, an ideal ruler…who, in reality was Lord Ram?” quizzed the  Amazon-owned publishing house Westland before tweeting yesterday that the book was out.

Varma has selected “some of the most evocative  stanza, offering a succinct commentary for each, to capture the very core of the original(Ramcharitmanas)”, according to the book promo on Amazon.

A 16th century lyrical composition , the Ramcharitmanas in  Awadhi broke with the literary tradition of writing in Sanskrit, and as a result Lord Ram’s following only grew. Lay people were able to relate to the “Maryada Purushottam”.

There has got to be tremendous readability and relatability of Varma’s book with Gen Now. His previous book, “Adi Shankaracharya:Hinduism’s Greatest Thinker” was about an unexplored aspect of the 8th century philosopher.

The new book describes “a devoted son, a loving sibling, a committed lover, an ideal ruler and also a human, almost bereft of divinity”. While Ram the God is widely known and worshipped, there are people who have differences on how he was as a person, a man who threw out his wife Sita. Possibly the book will give a new dimension to any discussion on that. Varma however does not let go of the philosophical aspect of the Ramcharitmanas—the immutability of the soul over the merely corporeal; the transience of worldly pleasures; the placing of wisdom above knowledge.

The Ramcharitmanas unravels even the most profound concepts with utmost simplicity, blending philosophy with breathtaking verse. “Varma’s compelling new selection and commentary achieves this effect by combining the aesthetics, romance and imagery of the original work with the unadulterated spirituality that sparkles through the conduct of a great god”, according to the publisher’s note.

The BJP is on a high ever since the Supreme Court verdict in the Ram Janmabhoomi land dispute clearing the decks for the construction of a temple to Ram at Ayodhya. The Ram temple has been part of their political discourse all these years. But none of their leaders has been able to celebrate Ram or Hinduism the way those of other parties have, by prose or poetry. Or even cinema. May be screening the old serial is their first step!