Who should be saved first --Modi's dilemma

Telephone conversations -- there are no drawing room conversations these days—among  people with certain interests have one common wish from Prime Minister Narendra Modi ---that health spending ought to be prioritised, and that fixing an economy already under terrible slowdown can wait.

His  announcement of a total three week  curfew like lockdown of the country beginning March 25 was widely hailed, with senior Congress leader and former finance and home Minister P Chidambaram being among the first to welcome it, saying “I told you so”.

While some quarters were disappointed that the Prime Minister  did not announce relief for those who have been hit by job losses, there was relief that a Rs15000 crores immediate fund was announced for Covid19 induced healthcare needs. The Prime Minister is not expected to mention the nitty-gritties like relief for different sections, Direct Benefits Transfer, free rations, etc , but only indicate the broad  direction he is taking the country towards.Finance Minister Nirmala Sitharaman will address some or all these issues sooner than later.

But fact is, people are asking --save the economy, or save the people from the killer virus? Like the filmy, "Do we save the mother or the child?" That is simply not the issue. The problem is how do we save both. And daunting as that may sound, experts suggest it is possible to do both, by acting right away.

There are enough takers for the idea that more people may die on account of income loss than of the deadly virus if we do not act quickly. This  suggests that the Government of India will need all our backing to do the fine balancing between saving people and saving the economy, more so given scarce resources , huge population and time running out--for the economy and the people. 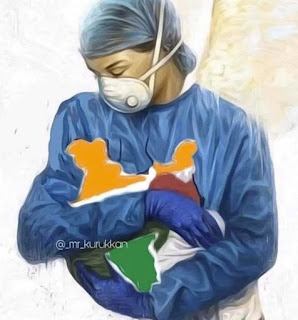 The truth is the economy is taking the brunt of COVID 19 just as  human beings are, with many sectors already feeling the impact of it and grinding to a halt.

A pilot with Air India had told us many months ago that their salaries were being horribly delayed, resulting in him delaying on EMI payments, resulting in penal interest.

Now things have only worsened as all airlines have to pay to park their fleet. Hotels had no guests or walk in diners at their restaurants and coffee shops  for more than a month now, and some are even spending on fumigation and sanitizing on an unprecedented scale.

Tourism...are we joking? Do we want the green bucks and those who bring them?

The automobile manufacturers and cell phone assemblers have only formally shut shop, albeit temporarily. Their productivity tapered down right when Wuhan came under lockdown, and Chinese goods became untouchable—literally.  Retailers, fleet operators,real estate, financial services that include insurance, capital markets,steel,cement and all manufacturing, all started feeling the heat as demand contracted.

Imagine if  when the virus tsunami is behind us, all we have is  just death, devastation and destruction, no skilled people, and no growth story to resume?

Nipun   Sahni, Partner at Apollo Global Management, says unprecedented events like these need solutions that "don't go by the playbook and should not be based on norms. " Neither should they be small incremental steps as the impact is minimal and does not solve the problem-- just as we cannot use buckets of water to douse a huge fire. The economic risk , he maintains, is as big as the health risk, and in what may sound like music to Prime Minister Modi's ears,  Sahni believes attending to the economy under virus threat is crucial to realising the goal  of India becoming  a $5 trillion economy by 2025.

Outlining a six-point action plan, Sahni says  they are "simple, easy to implement, equitable, transparent and can be announced and implemented before 1st April,2020.

The plan includes solvency measures, direct compensation benefit of  Rs 7500 per person per month for three months beginning April to employees to prevent job losses, on tap liquidity to MSME and Medium size corporates, on tap liquidity to corporates with annual turnover greater than Rs50 cores, and fiscal and monetary incentives for encouraging investment from individuals and businesses for the next two years.

And how much will all these cost? What about the funding?

Sahni' s calculation is $40-50 billion or 2 % of the GDP. About 60 to 65 % of this will be in the form of enhanced credit support for businesses and the remaining to support employee compensation in sectors impacted by COVID 19. He has mooted the idea of funding this by issuing a new category of tax free "India Pragati Bonds" with maturity period of 7,10 and 15 years.

"These measures can be implemented at short notice and are by no means comprehensive and. all encompassing. An early announcement of these measures will put money in the hands of those who need it thereby giving hope to millions of citizens and businesses ", says  Sahni.

The  “chaiwala” has become a romantic idea over the last few years, and none less than the Prime Minister has confirmed that it is a job, no less. But the countless workers in the unorganized sectors --the rickshawalas, auto drivers, chaiwalas, plumbers, electricians, dhobis, domestic helps, drivers, barbers, beauticians, florists ,courier and other delivery boys etc etc-- are actually numberless. The government has no database on these  informal sector  workers.

The government has said as much in Parliament, where they said a committee has been formed to arrive at the number!

In a press release isssued yesterday, Tapan Sen, General secretary of The Centre of Indian Trade Unions (CITU) has  put the figure at 93 % of all Indians who are working--meaning receiving a remuneration.